Entrance into Manchester via Water Street

Resource Type: Image | Posted on 3rd May 2011 by Jenny Porter

One of the Bury prints, painted by Thomas Talbot Bury, who was commissioned to paint depictions of the Liverpool and Manchester Railway. This one shows a train entering Manchester Liverpool Road station, the original Manchester terminus of the Liverpool and Manchester Railway. The station was built as a bridge over Water Street and the River Irwell, and was some distance from Manchester city centre, so most passengers bought handwritten tickets from agents at hotels or inns, and would travel to the station in a horse-pulled bus. In the booking hall, a clerk exhanged the ticket for a counterfoil and then composed a waybill, based on ticket information, so the guard could check for fraud. The passengers, meanwhile, would go upstairs to the waiting room, and licenced “outdoor porters” would take charge of their luggage for a fee. On the platform, “indoor porters” would assume responsibility for the luggage on the platform and strap it to the coach roofs. Then, the station bell would ring to allow the passengers to go through the door onto the platform and board the train: the original bell is exhibited in the station building. However, in a sign of primitive design (understandable in the early days of passenger railways), the building pillars prevented some coach doors from opening fully! On 4th May 1844, passenger services were transferred to the newly-built Manchester Victoria station, as a result of the extension of the Liverpool and Manchester Railway from Ordsall Lane to Hunt’s Bank, to join the Manchester and Leeds Railway, and Liverpool Road, which was too small to cope with the increasing passenger numbers, was turned into a goods yard. It was finally abandoned in 1975, with goods traffic declining, and its buildings purchased by Granada Television: parts are used as sets for Coronation Street. It is now part of the Museum of Science and Industry, which was set up after Liverpool Road was used in 1980 for the 150th anniversary celebrations of the opening of the Liverpool and Manchester Railway: the first-class booking hall has been restored, and a replica of the Planet is regularly in steam there. It is the world’s oldest surviving railway station: however, Edge Hill is the oldest station still in use 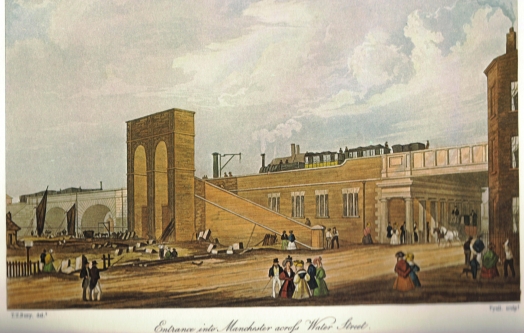