Moorish Arch, Looking from the Tunnel

Resource Type: Image | Posted on 3rd May 2011 by Jenny Porter

One of the Bury prints, painted by Thomas Talbot Bury, who was commissioned to paint depictions of the Liverpool and Manchester Railway. Here we see another view of the Wapping Tunnel, dominated by the lovely Moorish Arch. A steam engine can be seen just in front of the Arch, and near that, a railwayman proudly shows off a truck to a well-off couple. When the Railway was being constructed, George Stephenson was asked to build something ornate, in contrast to the plain buildings on the Stockton and Darlington Railway, and he built the Arch over the line at Edge Hill cutting to hide the stationary engines which hauled trucks through the Wapping Tunnel, thus concealing the fact that this was where the locomotives took over from cable haulage. It has now fallen into decay: the success of the Liverpool and Manchester Railway meant it had to be knocked down to widen the line and give more access to Crown Street. 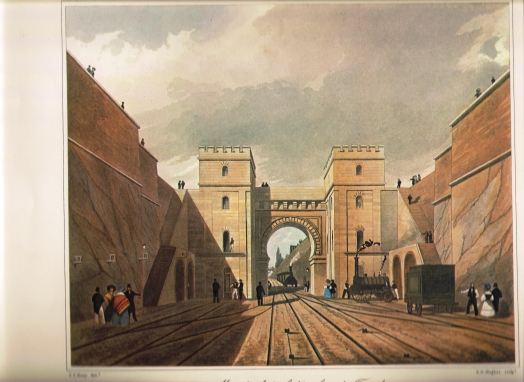